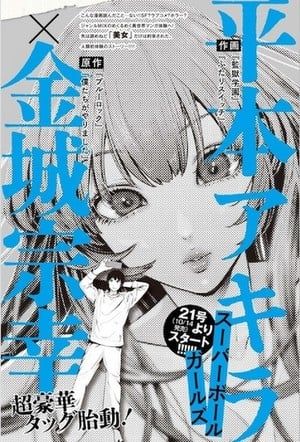 This year’s 14th issue of Shogakukan‘s Big Comic Superior magazine revealed on Friday that Akira Hiramoto and Muneyuki Kaneshiro will launch a new manga titled Super Ball Girls in the magazine’s 21st issue on October 14. Hiramoto will draw the art, and Kaneshiro will write the series.

The magazine describes the manga as an isekai story that will center on beatiful girls, but will be a mix of genres, including science fiction, romantic comedy, and horror, among others.

Hiramoto also drew the Me and the Devil Blues manga. The manga launched in 2004 but took a hiatus from 2008 to 2015 before publishing a few more chapters. The manga’s fifth volume released in 2015. Del Rey once licensed and released the series in English.

Hiramoto launched Prison School in Kodansha‘s Young Magazine in February 2011 and ended it in December 2017. The manga inspired a television anime and a live-action series, and Funimation released both adaptations in North America via streaming and home video.

Kaneshiro previously wrote the Kami-sama no Iu Toori (As the Gods Will) manga with artist Akeji Fujimura in Kodansha‘s Bessatsu Shōnen Magazine from 2011 to 2012. They then launched a sequel series titled As the Gods Will: The Second Series (Kami-sama no Iu Toori Ni) in Kodansha‘s Weekly Shōnen Magazine in 2013. The manga ended in December 2016. Crunchyroll simultaneously published chapters online along with the Japanese release, and Kodansha Comics released the 21 compiled volumes digitally.

Kaneshiro and Yūsuke Nomura launched the Blue Lock manga in Weekly Shōnen Magazine in August 2018, and the manga is ongoing. Kodansha Comics is publishing the manga in English. The manga is inspiring a television anime adaptation that will premiere in October.