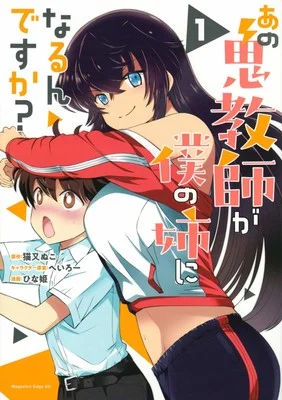 This year’s July issue of Kodansha‘s Shonen Magazine Edge magazine revealed on Friday that Hinahime manga adaptation of Nuko Nekomata and Heiro‘s Ano Oni Kyōshi ga Boku no Ane ni Narundesuka? (That Demonic Teacher Will Be My Sister?) light novel will end in the magazine’s next issue on July 15.

The novel centers on a boy who is initially overjoyed at the news of him having an older sister due to his father remarrying to a woman who has a daughter, until he finds out that his new sister is actually his school’s strict PE teacher, Shina. With his father going off to live with his new wife, the boy will live with alone with his new sister. In their new life together, the boy finds out that Shina at work is completely different from Shina at home: clumsy, scared of insects, and kind.

Nekomata published the novel’s third volume with illustrations by Heiro in April 2021.

ShuCream BL Releases Ask and You Will Receive, Under My Skin, Hatsujo Playroom, More Manga in English