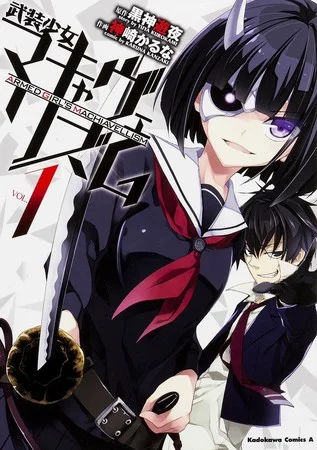 This year’s June isue of Kadokawa‘s Monthly Shōnen Ace magazine revealed on Thursday that Karuna Kanzaki and Yūya Kurokami‘s Armed Girl’s Machiavellism manga is ending in the magazine’s next issue in June.

The manga inspired an anime that debuted in April 2017. Sentai Filmworks streamed the series exclusively on Amazon‘s Anime Strike streaming channel as it aired in Japan. Amazon shut down the channel in January 2018 after about a year of service, but Armed Girl’s Machiavellism and other Anime Strike titles are still available on Amazon Prime and HIDIVE.

The “school rebellion battle action” story follows Fudō Nomura, who transfers to a school where girls carry weapons to rule mercilessly over the boys. Shortly after transferring he becomes a target of Rin Onigawara, a member of the Five Ruling Swords that commands the school. In order break free he must defeat the Five Ruling Swords.