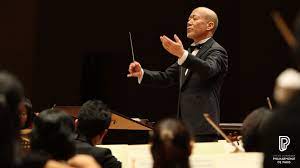 The European public service channel Arte is currently streaming composer Joe Hisaishi‘s concert with the Paris Philharmonie. The concert is only available for viewing from Sunday to Monday.

Hisaishi conducted his “Symphony No. 2;” an arrangement from Ponyo titled “Woman” for piano, harp, percussion, and strings; and a symphonic suite from Princess Mononoke with the Paris Philharmonie on Friday, Saturday, and Sunday.

Hisaishi, a frequent Studio Ghibli collaborator, has composed soundtracks for Hayao Miyazaki‘s Spirited Away, Nausicaä of the Valley of the Wind, Laputa: Castle in the Sky, My Neighbor Totoro, and more. More recently, Hisaishi composed the music for Studio 4°C‘s anime film of Daisuke Igarashi‘s Children of the Sea (Kaijū no Kodomo) manga, which opened in June 2019. He also composed music for the live-action television series of Fumiyo Kouno‘s In This Corner of the World (Kono Sekai no Katasumi ni) manga, which premiered in July 2018.