Toei began streaming a project promotional video for the anime films of Yomiji Otono’s Boku ga Aishita Subete no Kimi e (To Every You I’ve Loved Before) and Kimi o Aishita Hitori no Boku e (To The Solitary Me That Loved You) novels on Friday. The video previews both films, and reveals their simultaneous October 7 opening date, as well as their staff. 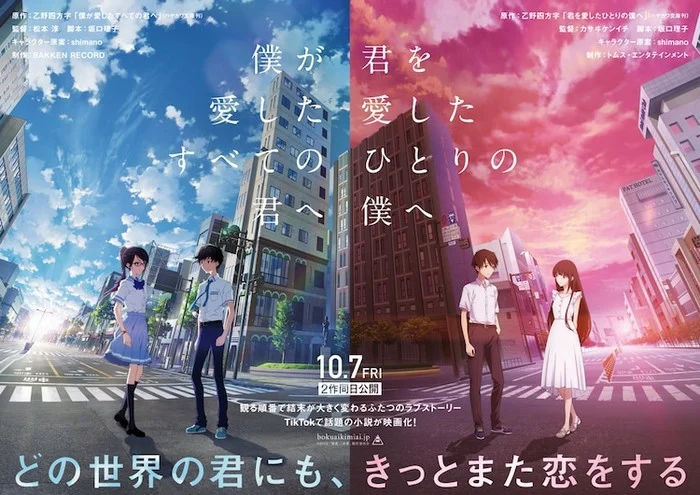 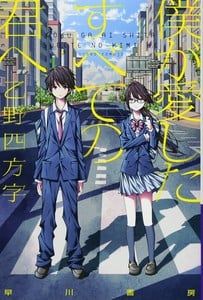 Each movie will have different directors and animation studios. Jun Matsumoto (Brothers Conflict, Night Raid 1931) is directing Boku ga Aishita Subete no Kimi e at BAKKEN RECORD. Kenichi Kasai (Honey and Clover, Nodame Cantabile, Amanchu!) is directing Kimi o Aishita Hitori no Boku e at TMS Entertainment. Riko Sakaguchi (The Tale of the Princess Kaguya, Mary and The Witch’s Flower) is penning the script for both films, and shimano (JK Haru is a Sex Worker in Another World novel cover art) is credited for character design concepts for both films.

Otono released the two science-fiction romance novels on the same day on June 23, 2016. Both complement each other, but can be read in either order. The books take place in a world where traveling to parallel worlds is a common, everyday occurrence. 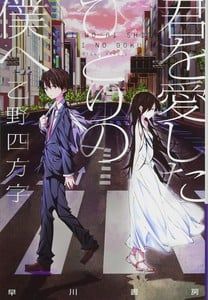 Boku ga Aishita Subete no Kimi e centers on Koyomi Takasaki, a boy who lives with his mother after his parents divorce. He attempts to make friends in his new college prep school, but his social awkwardness combined with an atmosphere of focusing on studies means he is unsuccessful. One day, his classmate Kazune Takigawa approaches him, and tells him that she is actually from World Line 85, where she and Koyomi are lovers.

Kimi o Aishita Hitori no Boku e centers on Koyomi Hidaka, a boy who lives with his father after his parents divorce. He meets a girl named Shiori Satō at his father’s research lab, and they begin a relationship that is slowly blossoming into love. But everything changes when their parents decide to marry each other, and they decide to move to a parallel world where they are not stepsiblings.