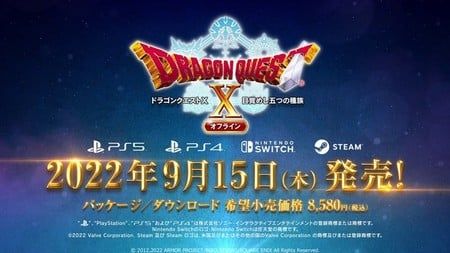 Square Enix announced on Tuesday that Dragon Quest X Offline: Mezameshi Itsutsu no Shuzoku, the offline version of its Dragon Quest X game, will launch for PlayStation 4, PlayStation 5, Nintendo Switch, and PC via Steam on September 15 in Japan. The game’s “Dragon Quest X: Nemureru Yūsha to Michibiki no Meiyū Offline” (The Sleeping Hero and the Guiding Friend) large DLC expansion will launch in spring 2023, delayed from its planned fall 2022 release.

Square Enix released Dragon Quest X for the Wii and Wii U consoles in March 2013, and for PC in September 2013. There have also been Android and Nintendo 3DS versions of the game. Square Enix released the game’s PS4 and Switch versions in 2017, and released a version for browsers in 2020.