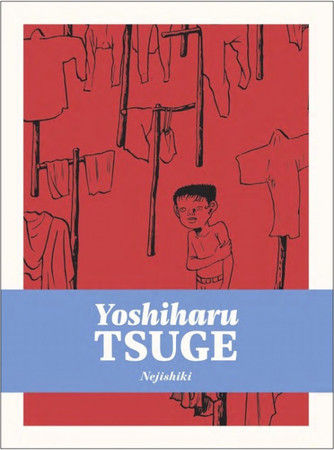 The company’s release of the Nejishiki collection will feature a new translation by Ryan Holmberg. The company is also previewing the manga on its website.

Tsuge began publishing the manga in the collection in the Garo magazine in 1968. The Comics Journal published the manga in English in 2003 under the title Screw Style.

Nejishiki unveils the most iconic scenes from Yoshiharu Tsuge‘s highly respected body of work alongside his most beloved stories. A cornerstone of Japan’s legendary 1960s counterculture that galvanized avant-garde manga and comics criticism, the title story follows an injured young man as he wanders through a village of strangers in search of emotional and physical release. Other stories in this collection follow a series of weary travelers who while away sultry nights and face menacing doppelgangers. Even banal activities like afternoon strolls uncover unsavory impulses. The emotionally and erotically charged imagery collected in this third volume remains as shocking and vivid today as it did upon its debut fifty years ago.

Drawn & Quarterly is releasing Tsuge’s complete works in a seven-volume set and shipped the first volume, The Swamp, in April 2020. The publisher released Tsuge’s Red Flowers manga in January 2021.

Tsuge was a pioneer of gekiga (“dramatic pictures”) comics, a genre named by Yoshihiro Tatsumi in 1957 to describe an alternative style of manga that stresses realism and is aimed at adults. He is perhaps best known for his 1968 manga Nejishiki (“Screw-Style“), a surreal story about a man wandering a desolate, post-war Japan. The Japan Art Academy nominated Tsuge as one of its first manga artists to become a member this year.

Teruo Ishii directed a live-action film adaptation of Nejishiki in 1998. Panik House released the film in North America under the title Screwed.