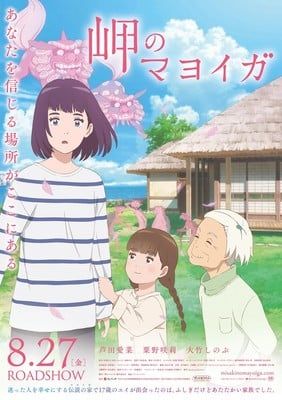 Eleven Arts announced at its panel at the A-Kon event on Saturday that it has licensed The House of the Lost on the Cape, david production‘s anime film of Sachiko Kashiwaba‘s Misaki no Mayoiga novel; and DEEMO Memorial Keys (Deemo: Sakura no Oto – Anata no Kanadeta Oto ga, Ima mo Hibiku), the anime film based on Rayark Games’ Deemo game.

The company describes The House of the Lost on the Cape:

17-year-old run-away Yui and 8-year-old Hiyori, who lost her family and her voice, have no place to go when they run into Kiwa, a strange old lady. She offers them a place to stay, in a slightly banged-up old house overlooking the sea, a Mayoiga. Despite joining Kiwa on a whim, the two girls find comfort in Mayoiga, a legendary house, said to look after lost travelers, and the warm hospitality of Kiwa. Both girls’ damaged hearts begin to heal little by little. Until one day, a variety of strange beings which Kiwa calls “Fushigitto” begin popping up around the house.

The House of the Lost on the Cape opened in Japan in August 2021. The film won the Best Animation Film award at the 76th Annual Mainichi Film Awards in January. The film will also compete at this year’s Annecy International Animation Film Festival.

Kashiwaba released the original novel in 2015, and it won the 2016 Noma Award for Juvenile Fiction. 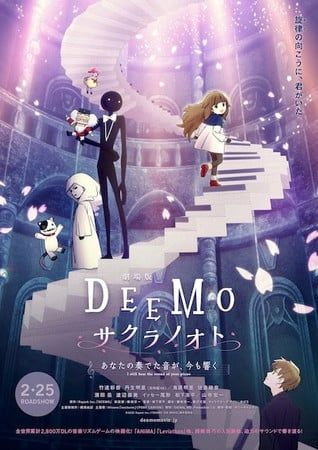 Alone in a castle, a figure plays a piano… Deemo
One day, a girl falls from the sky
A castle littered with mysterious inhabitants
A sacred tree growing by the melody of piano
A girl with no memory and Deemo
A gentle story that will touch your heart.

Deemo, a mysterious lonely character that plays a piano in a castle. One day, a girl who has lost her memory comes falling from the sky. A gentle, ephemeral story of love spun by Deemo, the girl, the mystical residents of the castle, and a tree that grows with the sound of the piano.

The film debuted in Japan on February 25.

The original 2013 rhythm game, Deemo, debuted as an iOS and Android smartphone game. Rayark Games later released the game on the PlayStation Vita in Japan in 2015 with the title Deemo: Last Recital. PM Studios and Rising Star Games released the game on PS Vita in North America and Europe, respectively, in May 2017. The game received a release on the Nintendo Switch worldwide in September 2017. Deemo -Reborn-, a new version of the game compatible with virtual reality devices, debuted in November 2019. Deemo -Reborn- then received a global release on Steam in September 2020, and launched for the Switch, as well as iOS and Android devices, in December 2020.