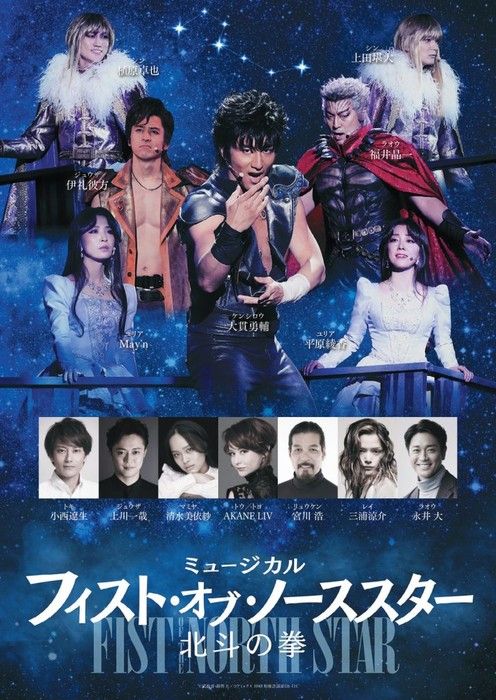 The musical will run at the Bunkamura Orchard Hall in Tokyo from September 25 to 30, and at the Canal City Theater in Fukuoka from October 7 to 10.

The stage musical is a co-production of HoriPro, Hakuhodo DY Media Partners, and the Shanghai-based theatre performance company Ranspace, in collaboration with Coamix. Frank Wildhorn (Jekyll & HYDE, Whitney Houston’s “Where Do Broken Hearts Go,” Death Note: The Musical) scored the music, and Sachiko Ishimaru is directing. Ako Takahashi wrote the book and lyrics, while Jasmine Chiu handled the choreography.

The production’s first run held its world premiere at Tokyo’s Nissay Theatre last December, before playing in other regions of Japan in January. The musical is still slated to go on tour in China this fall.

HoriPro is streaming a six-minute digest video of the first run of the stage play with English subtitles.

The manga previously inspired the Hokuto no Ken – Seikimatsu Zako Densetsu (Fist of the North Star – End of the Century Legend of a Random Thug) stage production in September 2017.