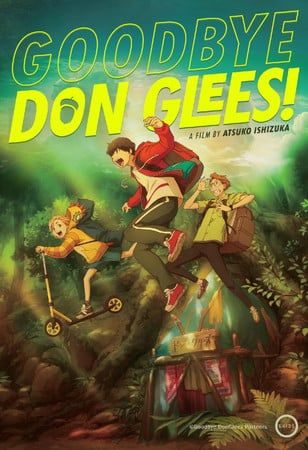 GKIDS announced on Thursday that it has acquired the North American rights to Atsuko Ishizuka and Madhouse‘s Goodbye, Don Glees! original anime film, and it will screen the movie in Japanese with English subtitles and with an English dub this year.

The film opened on February 18. The film is screening at this year’s Annecy International Animation Film Festival, which will run from June 13-18 in France.

The story centers on two boys named Rōma and Toto. The boys meet when Rōma moves from Tokyo to the countryside, which he cannot grow accustomed to. But when he meets Toto, they become a duo, naming themselves “Don Glees.” Eventually, Toto was supposed to move out to Tokyo for school, but on the summer of their first year of high school, they meet Drop, a new addition to Don Glees, who invites them to “view the world from above.” When Rōma and Toto follow Drop, they become involved in a forest fire that gets blamed on them, and go off in search of a missing drone that has evidence of their innocence. A small incident becomes an important, life-changing journey that culminates in Iceland.

Ayano Okamoto was the art director of the film, while Eiko Tsunadō and Akihiro Hirasawa were credited for art setting. Saho Yamane collaborated on the art board production. Harue Ono was the color key artist. Yūki Kawashita was the compositing director of photography. Shigenori Hirozumi and Kana Imagaki were the 3D directors. Kashiko Kimura was the editor. Yoshiaki Fujisawa (No Game, No Life Zero, A Place Further Than the Universe, Revue Starlight) composed the music. Jin Aketagawa was the audio director, while Tsutomu Ueno handled the sound effects.

The film is Ishizuka’s first original anime film. Ishizuka commented that the film is set in Iceland, saying that “after reaching Antarctica” in her previous anime A Place Further Than the Universe, she opened a map and looked for the opposite extreme from Antarctica.

Both Ishizuka and Yoshimatsu worked on A Place Further Than the Universe, a 2018 television anime about four girls who jump on an opportunity to join an Antarctic expedition for their own complicated reasons. Crunchyroll streamed the series as it aired.

Attack on Titan OADs' English Dubs Premiere on May 8