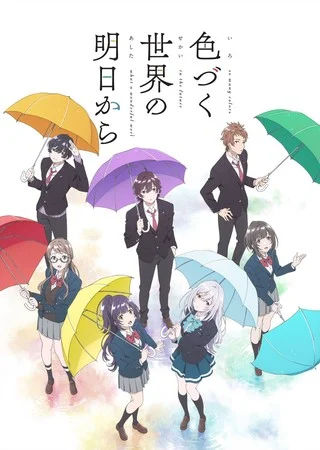 HIDIVE began streaming the English dub for the IRODUKU: The World in Colors (Iroduku Sekai no Ashita kara. or so many colors in the future what a wonderful world) anime project on Sunday. The English dub cast includes:

John Swasey is the ADR Director. Joel McCray and Marta Bechtol wrote the scripts. Brent Marshall is in charge of English mix and Patrick Marrero is the audio engineer.

The anime debuted on Amazon Prime in Japan and overseas in October 2018, and it also aired on television in Japan. The anime has 13 episodes. Sentai Filmworks licensed the anime.

The story takes place in Nagasaki in a world where a small amount of magic remains in everyday life. A descendant of mages, 17-year-old Hitomi lost her sense of color at a young age and grew up lacking emotion. Her grandmother Kohaku, a great mage, sends Hitomi to the past, to the year 2018. There, she spends time with a 17-year-old Kohaku and friends from club activities.

Toshiya Shinohara (A Lull in the Sea, Black Butler, The Book of Bantorra) directed the anime. Yuuko Kakihara was in charge of the series scripts. Yuki Akiyama (GLASSLIP, Charlotte) served as chief animation director and adapting character designs by Fly (Kemono Friends: Welcome to Japari Park) for animation. Infinite produced the work.