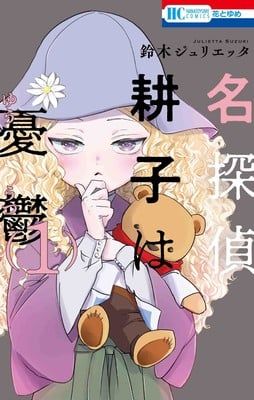 This year’s 12th issue of Hakusensha‘s Hana to Yume magazine revealed on Friday that Julietta Suzuki‘s Meitantei Kо̄ko wa Yūutsu (Detective Kо̄ko is Melancholy) manga will end in the magazine’s next issue on June 3.

The manga is set during the height of the Showa era, and centers on a little girl named Kōko who is in training to become a detective. She is hired by a notable family to find out who sent a death threat to the family’s son Inugami, who currently resides in a dormitory in Tokyo. To this end, she moves in to the dormitory to begin her investigation, but she is bad at cooking and even worse at figuring out where to start with the case.

Suzuki published a one-shot for the manga in Hana to Yume January 2020, before serializing it in the magazine in September 2020. Hakusensha published the manga’s fourth compiled book volume on February 18.

Suzuki launched the Kamisama Kiss manga in Hana to Yume in 2008, and ended the series in May 2016 with 25 volumes. Viz Media has published the manga in English.

Kamisama Kiss inspired two anime seasons. Funimation streamed both seasons as they aired in Japan, and also released both seasons on home video. The manga also inspired a series of four original anime DVDs (OADs) that shipped with the manga’s 22nd-25th compiled volumes. A “volume 25.5,” an official fanbook, shipped in December 2016. The fanbook bundled a DVD with an original anime and a 32-page epilogue manga.