This year’s 26th issue of Shueisha‘s Young Jump magazine revealed on Thursday that Jun Esaka and Takahide Totsuno are launching a new manga titled she is beautiful on the Tonari no Young Jump manga website on June 10. Esaka is writing the manga, and Totsuno is drawing the art. 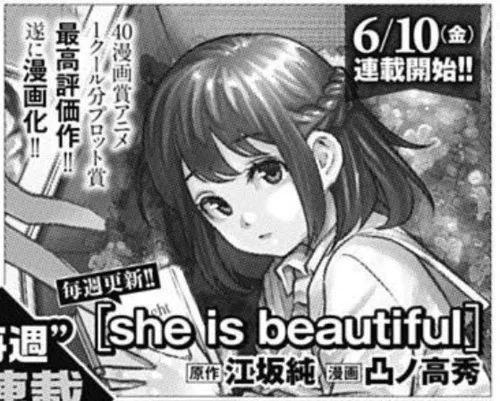 The manga is based on Esaka’s runner-up winning story “Beautiful” in the Young Jump “Anime 1 Cours-bun Plot” contest in 2020, where contestants submitted plot concepts that would fit for an imagined three-month run of an anime. Esaka won 500,000 yen (about US$3,900) for the contest.

Esaka’s original story centers on Kurumi, a girl who grew up in an institution, and is excited on the eve of her 10th birthday, when her vocation will be announced to her. But when she awakens, she is already 22 years old, and she is somehow living with Kiyoka, a friend with whom she did not get along too well in the past. She finds out that on the day of her 10th birthday, she had an accident, and she began to suffer from a condition that only lets her hold memories one day at a time, and that 12 years had passed since then.