The staff of Power Morphicon announced on Monday that actor Ryota Ozawa (Kaizoku Sentai Gokaiger) will travel from Japan to attend the event as a guest. The seventh iteration of the event will take place from August 26-28 at the Pasadena Convention Center in California. 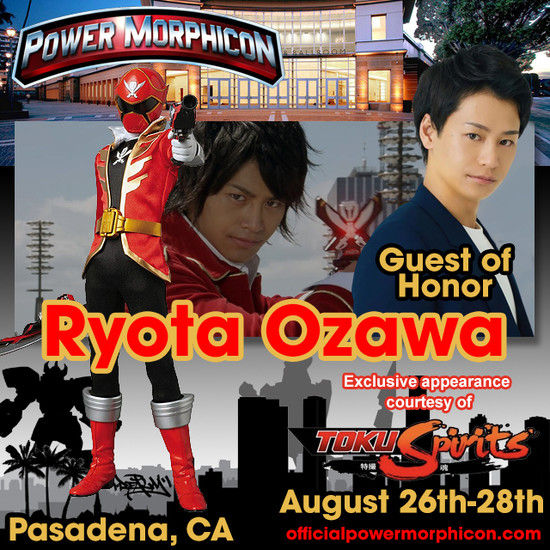 Ryota Ozawa portrayed Gokai Red (Captain Marvelous) in the Kaizoku Sentai Gokaiger series, which premiered in February 2011. The show celebrated the franchise‘s 35th anniversary by featuring a team who could transform into any of the previous Super Sentai costumes. Footage from the show was used for the Power Rangers Super Megaforce show, which aired in 2014.

Ozawa reprised the role in several Super Sentai films and television series, including the Gokaiger Goseiger Super Sentai 199 Hero Great Battle film that premiered in May 2011, and most recently the Super Sentai Saikyō Battle!! mini-series that aired in 2019.

The latest Super Sentai television series, Avataro Sentai Donbrothers, premiered on March 26. The show is the 46th in the live-action Super Sentai series since 1975.

The Power Morphicon event takes place every two years in Pasadena, California. It focuses on the Power Rangers tokusatsu series as well as related series such as VR Troopers, Beetleborgs, Kamen Rider, Superhuman Syber Squad and Super Sentai. The event averages 10,000 attendees and has activities such as cosplay, prop/FX workshops, and martial arts classes/demos as well as panels with guests and other events.

Gackt Slowly Recovers From Sickness, Aims to Return This Year

Man With a Mission Bassist Kamikaze Boy Goes on Hiatus