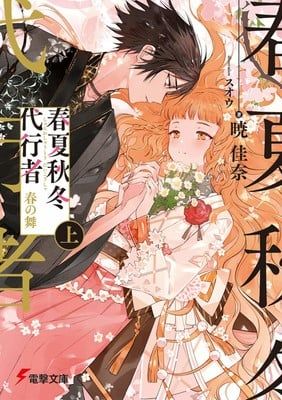 The July issue of Hakusensha‘s LaLa magazine revealed on Tuesday that Kana Akatsuki‘s Shunka Shūtō Daikōsha Haru no Mai (Four Seasons’ Proxy Spring Dance) novel series is inspiring a manga adaptation by Nappa Komatsuda. The manga will launch in the magazine’s September issue on July 23, with the first chapter being 57 pages long.

The novels take place in a world where the only season is Winter. Winter lives a lonely existence, and so they create Spring. A short time later, due to the wishes of the land, Summer and Fall are also born, and the four seasons are complete. The human children in charge of bringing in the new season every three months are called the “Proxies of the Four Seasons.”

Kadokawa publishes the novels by Akatsuki (Violet Evergarden) with illustrations by Suō, and it published the first two volumes together in April 2021. The novels topped the 2022 edition of Takarajimasha‘s Kono Light Novel ga Sugoi! (This Light Novel Is Amazing!) guidebook’s New Title category in 2021.

Akatsuki’s Violet Evergarden novel series won the grand prize in the fifth Kyoto Animation Award program’s novel category in 2014. Akatsuki published the novels under Kyoto Animation‘s KA Esuma Bunko label. The novels inspired a television anime in 2018, a side story anime in 2019, and a theatrical anime sequel in 2020.