The official website for the live-action film adaptation of Kaori Tsurutani‘s BL Metamorphosis (Metamorphose no Engawa) manga began streaming a trailer for the film on Monday. The trailer reveals and previews the film’s theme song, a cover of the Tjiros song “Kore Sae Areba” (As Long as I Have This) performed by lead actresses Mana Ashida and Nobuko Miyamoto. 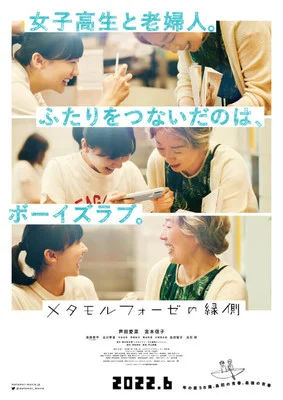 The film will open on June 17.

Shunsuke Kariyama is directing the film, with a script by Yoshikazu Okada. Hidehiro Kawano, Yutaka Tanito, and Hiroko Ōgura are credited as producers. Both Tsurutani and BL manga creator Janome are drawing the BL manga that will appear within the film.

Ichinoi, a 75-year-old woman living a peaceful life, unwittingly buys a Boy’s Love manga one day…and is fascinated by what she finds inside. When she returns to the bookstore to buy the next volume, the high school girl working there–Urara, a seasoned BL fan–notices a budding fangirl when she sees one. When Urara offers to help Ichinoi explore this whole new world of fiction, the two dive into BL fandom together, and form an unlikely friendship along the way.

2nd Sumikko Gurashi Film Falls to #4, 'What Did You Eat Yesterday?' Stays at #6 at Box Office

Requiem of the Rose King Manga Gets Stage Play