The official website for Shueisha‘s Ultra Jump magazine revealed on Thursday that merryhachi will launch a new manga titled Zenbu Kimi no Sei da (It’s All Your Fault) in the magazine’s July issue on June 17. The manga’s first chapter will have an opening color page. 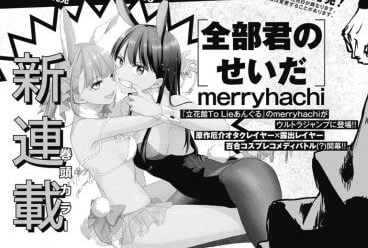 merryhachi launched the Love to Lie Angle manga in Ichijinsha‘s Comic Yuri Hime magazine in 2014 and ended the series in April 2020. The ninth and final volume shipped in Japan in June 2020. Digital Manga Publishing published the first volume of the manga in English.

The manga inspired a television anime adaptation that premiered in April 2018. Crunchyroll streamed the 12-episode series as it aired.

Kohei Horikoshi: 'If Things Go Smoothly My Hero Academia Will Meet Its Goal in 1 Year'