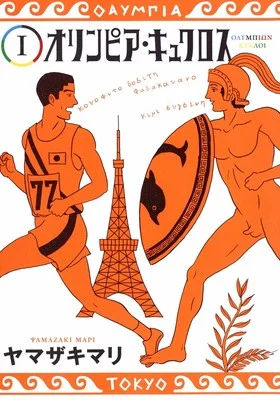 This year’s 13th issue of Shueisha‘s Grand Jump magazine revealed on Wednesday that Mari Yamazaki‘s Olympia Kyklos manga will end in three chapters. The manga will serialize for three consecutive issues, and so it should end in the magazine’s 16th issue on July 20.

The manga went on hiatus in August 2021 so that Yamazaki could do preparatory work on the manga. It was originally announced with a return last winter, but returned in Grand Jump magazine’s 13th issue on Wednesday.

Crunchyroll previously streamed Extra Olympia Kyklos (Bessatsu Olympia Kyklos), the television anime of the manga, and it describes the story:

Demetrios was a young man in Ancient Greece who was a potter’s apprentice, but also a rather timid otaku. Despite pursuing the arts, he was blessed with natural athletic talent.

One day, he gets dragged into a village conflict. Demetrios contemplates how helpless he is, but then is struck by lightning! When he comes to, he is no longer in Greece, but a strange land where he can’t understand the language and people look rather different.

Yes, he somehow ended up 1964 Tokyo! Of course, Demetrios has no idea what Japan even is. What will become of him?!

Yamazaki ended her Thermae Romae manga in March 2013. The manga inspired a three-episode anime in 2012 and two live-action films starring Hiroshi Abe and Aya Ueto. Yen Press publishes the manga in North America, while Discotek licensed the anime in North America. Crunchyroll is streaming the anime with English subtitles and an English dub. The manga inspired a new anime series, titled Thermae Romae Novae, that debuted on Netflix on March 28.

'How Clumsy you are, Miss Ueno' Manga Ends in 2 Chapters