The expansion will debut for Switch and PC via Steam on June 30.

Players who already own the base Monster Hunter Rise game can purchase the expansion as DLC. There is also a set including both the base game and Sunbreak expansion. There game is also getting three new amiibo that will unlock costume sets in the game.

The base game is getting a title update on June 30 in preparation for the new expansion.

Monster Hunter Rise: Sunbreak will have an all-new story, with new locations to visit, as well as new gameplay mechanics. It will feature the new Elder Dragon Malzeno and the new Master Rank. The expansion will also bring back the Shogun Ceanataur from Monster Hunter 2 along with several other monsters from previous games in the series including Monster Hunter 4’s Seregios as well as two new monsters, Magma Almudron and Aurora Somnacanth. 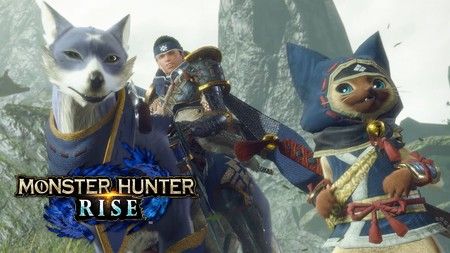 Monster Hunter Rise has surpassed 8 million copies shipped in both physical and digital sales worldwide. The franchise‘s games have shipped a cumulative 78 million units as of September 30.

The game launched on PC via Steam on January 12. The PC version of the game features 4K resolution, high-res textures, high framerates, optimized keyboard/mouse controls, voice chat, and ultrawide display. It also includes all content from the Nintendo Switch version up to November 2021.

Monster Hunter Rise launched on Switch on March 2021. The game got a collaboration with CAPCOM‘s Ghosts ‘n’ Goblins Resurrection game on October 29 and Sega‘s Sonic the Hedgehog franchise on November 26.

The “Rise” in the title refers to hunter utilizing the verticality of the game’s environment, as well as the developers’ desire to build enthusiasm with many players around the world. The new Wirebug allows players to complete new actions and climb a variety of vertical locations. New monsters in the game include Magnamalo, Aknosom, Great Izuchi, and Tetranodon. New locations include the Shrine Ruins. The game’s base is the village of Kamura, and the story features a rampage.