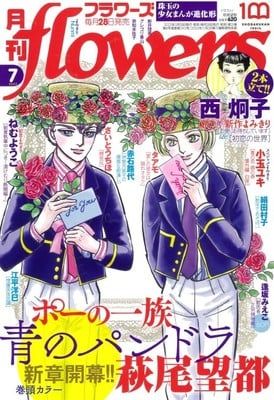 Moto Hagio debuted the new manga series in her Poe no Ichizoku (The Poe Clan) manga in the July issue of Shogakukan‘s Flowers magazine (seen right) on Friday. The new series is the fourth sequel to the main manga, and is titled Poe no Ichizoku: Ao no Pandora (The Poe Clan: Blue Pandora). The new arc is set in Munich, Germany in 2016.

The original The Poe Clan manga is a fantasy series that depicts several short stories revolving around a young vampire named Edgar who has lived for over 200 years. The series is set in Europe in the 19th and 20th centuries. Shogakukan published the manga’s five compiled volumes from 1974 to 1976.

Hagio wrote two new chapters for the manga titled “Poe no Ichizoku: Haru no Yume” in Monthly Flowers in May 2016 and May 2017. A compiled book volume for the new chapters shipped in July 2017.

Hagio launched the Poe no Ichizoku Unicorn series in Monthly Flowers in May 2018, but it went on hiatus in July 2018 and returned in March 2019. The manga ended its run with the fourth chapter May 2019, and the one compiled volume shipped in July 2019.

Poe no Ichizoku: Himitsu no Hanazono (The Poe Clan: The Secret Garden) then launched in May 2019, and the end of the first chapter announced a hiatus for the manga. The manga resumed in June 2020. The second and final book volume of the arc shipped in November 2021.

The manga has inspired a live-action television series, as well as a stage play adaptation by the famous all-female musical theater troupe Takarazuka Revue.