Muse Asia announced new anime licenses for the summer anime season on Thursday and Friday, including the second season of Rent-A-Girlfriend, Made in Abyss: The Golden City of the Scorching Sun, The Devil is a Part-Timer!!, the second season of Classroom of the Elite, Renmei Kūgun Kōkū Mahō Ongakutai Luminous Witches, and Isekai Yakkyoku. Muse Asia will announce distribution details for the titles at a later date.

The second season of the anime of Reiji Miyajima‘s Rent-A-Girlfriend (Kanojo, Okarishimasu) manga will premiere in Japan this July.

Kazuya Kinoshita, the worthless college student. Was dumped by his ever girlfriend after only one kiss and a month together. “I don’t want to put up with this anymore.” In desperation, Kazuya decides to go on a date with a girl using a certain method. And what he founds at the meeting place was— “You’re Kazuya, right?” A beautiful girl, Chizuru Mizuhara smiles at him as she puts her black hair behind her ear.

The first anime season premiered in July 2020. Muse Asia licensed the anime and streamed it through the iQIYI service. Animax Asia also aired the anime in April 2021. Made in Abyss: The Golden City of the Scorching Sun, the second television anime season based on Akihito Tsukushi‘s Made in Abyss manga, will premiere in July.

In the story of Made in Abyss, an enormous pit and cave system called the “Abyss” is the only unexplored place in the world. Strange and wonderful creatures reside in its depths, and it is full of precious relics that current humans are unable to make. The mysteries of the Abyss fascinate humans, and they head down to explore. The adventurers who venture into pit are known as “Cave Raiders.” A little orphan girl named Riko lives in the town of Ōrth on the edge of the Abyss. Her dream is to become a Cave Raider like her mother and solve the mysteries of the cave system. One day, Riko starts exploring the caves and discovers a robot who resembles a human boy. The second season of the television anime of Syougo Kinugasa‘s Classroom of the Elite (Yōkoso Jitsuryoku Shijō Shugi no Kyōshitsu e) light novel series will premiere in July. It will be followed by a third season in 2023.

Crunchyroll describes the story of the anime’s first season:

Kiyotaka Ayanokoji has just enrolled at Tokyo Koudo Ikusei Senior High School, where it’s said that 100% of students go on to college or find employment. But he ends up in Class 1-D, which is full of all the school’s problem children. What’s more, every month, the school awards students points with a cash value of 100,000 yen, and the classes employ a laissez-faire policy in which talking, sleeping, and even sabotage are permitted during class. One month later, Ayanokoji, Horikita, and the students of Class D learn the truth of the system in place within their school…

The first television anime premiered in July 2017. Animax Asia aired a simulcast of the anime as it aired in Japan. 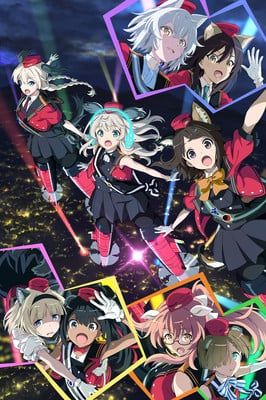 The story centers around a young pharmacologist who was so focused on his research that he died from overwork. He was transported to an alternate world and reincarnated as Pharma, the scion in a noble lineage of court healers. In this world where erroneous remedies and cures are rampant, he takes on all kinds of ailments to save lives, thanks to his inside knowledge of modern pharmacology from his past life.

Toonami Airs Made in Abyss Anime on January 15