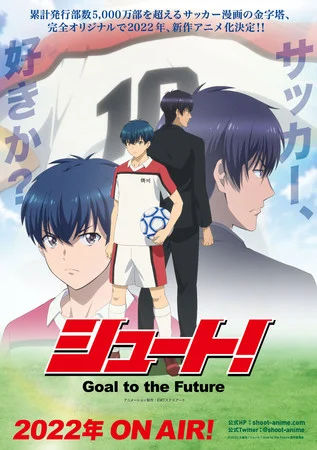 The official web site for Shoot! Goal to the Future, the first new anime primarily based on Tsukasa Ooshima‘s soccer-themed manga Shoot! in 28 years, introduced on Monday that musical duo All at Once will carry out the present’s ending theme track “Rivals.”

The anime will premiere in July on Tokyo MX, BS Fuji, TV Shizuoka, and AT-X.

Boa Sorte Management and Crunchyroll are credited for the anime’s planning. Noriyuki Nakamura (Dragon Slayer, Itsudatte My Santa!, Save Me! Lollipop) is directing the anime at EMT Squared, with Jun’ichi Kitamura (Cells at Work! Code Black, My Wife is the Student Council President episode director) as assistant director. Mitsutaka Hirota (Anime-Gataris, Rent-A-Girlfriend, Sweetness & Lightning) is answerable for the collection scripts, and Yukiko Akiyama (Black Cat, Yumeiro Pâtissière, Isuca) is designing the characters. Hiroshi Yamamoto is the sound director. Satoshi Dezaki is supervising the anime.

The authentic Shoot! manga ran in Kodansha‘s Weekly Shōnen Magazine between 1990 and 2003. The manga has greater than 50 million copies in print. The manga’s story revolves round a boy named Toshihiko Tanaka who satisfied his associates to be a part of the soccer crew and tackle the All-Japan High School Championship.