The “Hibike! Euphonium 6-kaime Da yo! Uji de O-Matsuri Festival” event announced on Saturday that Kyoto Animation‘s new Sound! Euphonium anime about Kumiko’s third year in high school will air in 2024. In addition, the “Ensemble Concert” arc will get a “medium-length” anime (longer than a short, shorter than a feature) next year.


The anime for the Ensemble Concert arc will have both a Blu-ray Disc release and theatrical screenings. The in-story band (as represented by the franchise‘s real-life Progressive! Wind Orchestra, theme song artist TRUE, and the cast in stage readings) is performing summer concerts on August 13 and 14 at Tokyo’s Line Cube Shibuya. 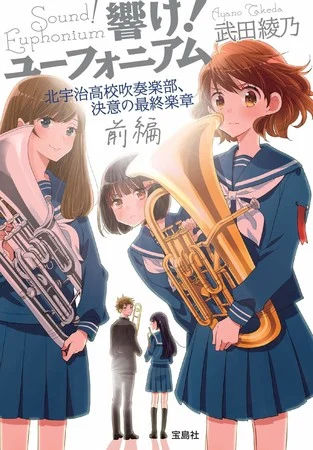 Note: The next paragraph contains spoilers for the novels.

In the novels, the band once again focuses on getting gold at Nationals. Kumiko is the new band president, with her ex-boyfriend Shuuichi Tsukamaoto as vice president, and Reina Kousaka as the drum major. As with the previous year, new first years enter the band with their own quirks, chief among them being Maya Kuroe, a euphonium player from Seira Girls School. Maya is a formidable presence in the school competition circuit, and Sapphire’s former school.

Kyoto Animation then announced two new anime films for the franchise in 2017. The Liz and the Blue Bird film centering on Mizore Yoroizuka and Nozomi Kasaki opened in Japan in April 2018. Eleven Arts screened the film in United States theaters with English subtitles and an English dub in November 2018. Shout! Factory released the film on Blu-ray Disc and DVD in March 2019.

The second new film, Sound! Euphonium The Movie – Our Promise: A Brand New Day (Hibike! Euphonium: Chikai no Finale), opened in Japan in April 2019. The film follows Kumiko as a second-year student. Eleven Arts screened the film in the U.S. in July 2019, and released the film on home video on June 2, 2020.