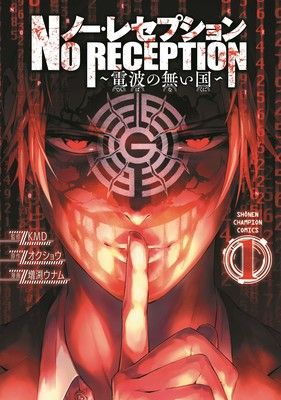 The July issue of Akita Shoten‘s Monthly Shōnen Champion magazine published the final chapter of the first part of Okushō and Unamu Masubuchi’s No Reception ~Denpa no Nai Kuni~ (A Land Without Radio Waves) manga on Monday. The magazine also noted that readers should await both creators’ next work.

The manga is set in our world, with the story beginning with all radio waves disappearing from the planet. Much of the world quickly descends into looting and chaos, with the United States in particular turning into a lawless territory practically overnight. The story centers on Paul, a man who lives quietly with his family, but is suddenly accused by the FBI of being somehow responsible for the disappearance of radio waves. Left with little choice, he sets out on a mission to find the real criminal to clear his name, and becomes involved in something far larger than his old, small life.

Shizumu Watanabe and Okushō launched the Real Account manga in Kodansha‘s Bessatsu Shōnen Magazine in the February 2014 issue, and ended it in November 2019. Kodansha published the manga’s 24th and final compiled book volume in December 2019. Kodansha Comics is publishing the manga digitally in English. The company released the omnibus volume containing volumes 15 to 17 on February 22. The manga is inspiring a live-action film adaptation.

Love and Lies Manga Returns From Hiatus, Ends With twelfth Volume on January 7