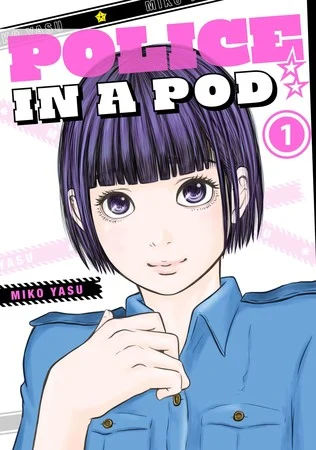 Kodansha‘s Comic Days manga website posted an interview on Thursday with manga creator Miko Yasu, and in the interview Yasu stated that the Police in a Pod (Hakozume: Kōban Joshi no Gyakushū) manga will soon end its first part and will go on hiatus “for a while.” Kodansha will publish the final chapter of the first part in this year’s 29th issue of Kodansha‘s Morning magazine on June 16.

Yasu explained that she has other things that she wants to draw, and that is why she is temporarily ending the manga. She added that while right now her current work features a protagonist with a gun, her next work will feature a male protagonist with a sword, and it will take place during a certain historical period in Japan. Yasu said she has been working on the new manga for three years now. Yasu added if possible she would like to serialize the new manga in Morning as well.

Yasu launched Police in a Pod in Kodansha‘s Morning magazine in November 2017, and Kodansha published the 20th volume on February 22. Kodansha Comics is publishing the manga in English, and it describes the first volume:

Female police officer Kawai had enough of a career she wasn’t even that into and was about to hand in her registration, when the unthinkable happened—she met the new, female director of her station! And after spending a little time with this gorgeous role model, Kawai realizes that maybe she isn’t quite done being an officer after all.

The manga has more than 4.5 million copies in circulation, including digital copies sold.

The manga inspired a television anime series that premiered on January 5. Funimation streamed the series as it aired. The manga also inspired a live-action series that aired from July to September 2021.

Sacrificial Princess & the King of Beasts Manga Gets Side-Story Chapter

Doraemon Co-Creator Fujiko Fujio A Passes Away at 88