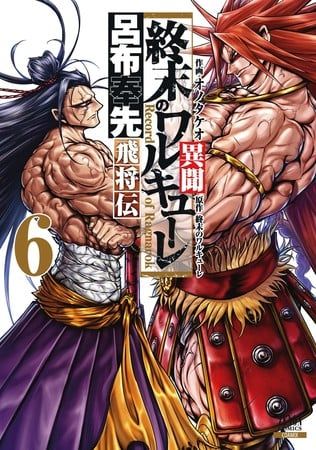 The sixth compiled book volume of Takeo Ono’s Ryo Fu Hō Sen Hishōden (The Legend of Lu Bu Fengxiang The Flying General), a spinoff of Shinya Umemura, Chika Aji, and Takumi Fukui‘s Shūmatsu no Walküre (Record of Ragnarok) manga, revealed on Monday that the manga will end in its seventh volume. The volume will ship on December 20.

The manga launched in Tokuma Shoten‘s Comic Zenon magazine in October 2019. The story centers on the character Lu Bu. Coamix and Imagineer‘s MangaHot app is publishing the manga in English under the title The Legend of Lu Bu.

The Shūmatsu no Walküre manga launched in the Comic Zenon magazine in November 2017. Umemura is writing the story, while Ajichika is drawing the art. Fukui is credited for composition.

The manga inspired an anime adaptation. The first season debuted on Netflix exclusively worldwide in June 2021. The anime premiered on television in Japan in October 2021.

Record of Ragnarok II — the second season of the anime — will debut on Netflix in 2023.