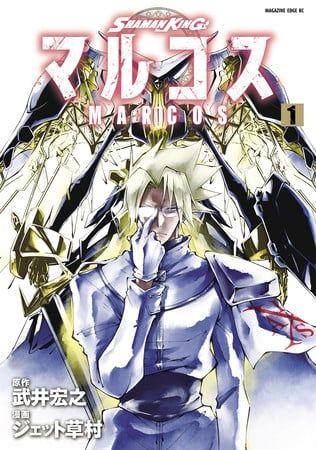 The manga debuted in Shonen Magazine Edge in April 2020. The manga’s fourth compiled book volume shipped on March 17. The spinoff manga’s story is about the journey to find Marco, and it connects to the F.O.M. (Flower of Maize) tournament.

The manga had gone on hiatus in May 2021 due to the author’s worsening tenosynovitis (inflammation of the sheath around a tendon).

The Comixology Originals service and Kodansha USA Publishing are publishing all of Takei’s Shaman King manga series digitally in English, and they describe the series:

In the world of Shaman King, shamans possess mysterious powers that allow them to commune with gods, spirits, and even the dead…and Manta Oyamada’s about to learn all about them, because his class just welcomed a new transfer student: Yoh Asakura, a boy from way off in Izumo…and a shaman in training!

Shaman King debuted in Shueisha‘s Weekly Shonen Jump magazine in 1998. The series abruptly ended in 2004, although a reprinting of the manga revealed a “true ending” in 2009.Viz Media published 32 volumes of the original Shaman King manga from 2003 to 2011, but it no longer holds the license to the manga. Japanese publisher Kodansha is now listed as the trademark owner for “Shaman King” in Japan, Europe, and the United States Shueisha originally held the rights to the manga in Japan.

The new anime adapted all 35 volumes of the original manga’s new complete edition. The first anime adaptation of the manga premiered in 2001.