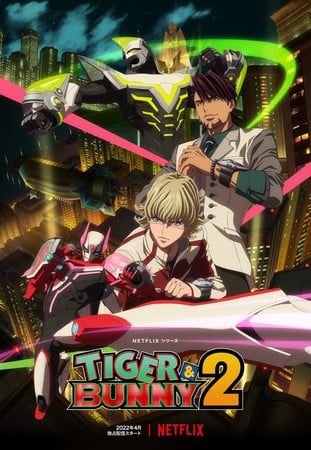 The original Tiger & Bunny television anime series centers around heroes for hire — super powered beings known as NEXT who wear sponsor logos while fighting crime on live television. The 2011 anime series spawned two anime movies: Tiger & Bunny the Movie: The Beginning in 2012 and Tiger & Bunny The Movie -The Rising- in 2014. Viz Media released the television series, the films, and the tie-in manga in North America.

The Tiger & Bunny 2 sequel anime debuted its first 13 episodes on Netflix worldwide on April 8. The anime will have a total of 25 episodes.

Ron Howard and Brian Grazer of Imagine Entertainment had previously planned a live-action Hollywood film adaptation of the anime. Former All Nippon Entertainment Works CEO Sandy Climan and Bandai Namco Pictures‘ Masayuki Ozaki were also on board to produce the film project. Imagine Entertainment President Erica Huggins would have overseen the project. The producers had hired Ellen Shanman as a scriptwriter. The film’s studio Global Road Entertainment filed for Chapter 11 bankruptcy in Delaware in September 2018. A representative for AMMO Entertainment (which is affiliated with Sandy Climan) confirmed with ANN last November that the project “has not been in a state of active development for several years” after All Nippon Entertainment Works had a corporate reorganization in 2017 and after the bankruptcy of Global Road Entertainment in 2018.