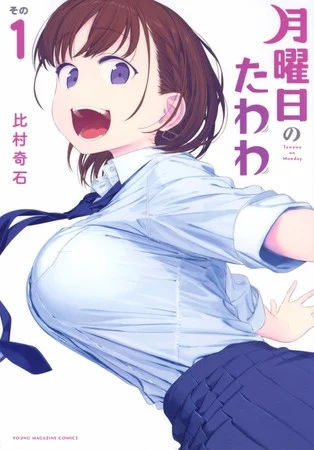 The combined 22nd and 23rd issue of Kodansha‘s Weekly Young Magazine revealed on April 25 that Kiseki Himura‘s Tawawa on Monday (Getsuyōbi no Tawawa) is going on hiatus until the magazine’s 29th issue on June 20.

The manga series began in 2015 as weekly pin-ups posted on artist Kiseki Himura‘s Twitter account. The main character, Ai, is a high school girl with large breasts who encounters a businessman on the train ride to school. The girl’s regular appearance on the train brightens up the man’s gloomy Monday commute.

A full-page ad for the Tawawa on Monday (Getsuyōbi no Tawawa) fanservice manga series was published in The Nikkei newspaper on April 4 and has since drawn criticism from the United Nations Entity for Gender Equality and the Empowerment of Women (UN Women). The global gender equality organization issued a letter to the newspaper on April 11 stating that the advertisement is “unacceptable” and asked for further clarification about the choice to print it.

The ad showed main character Ai standing in profile in her school uniform. The text reads, “I hope this will be a wonderful week.” Kodansha placed the ad to promote the release of the manga’s fourth volume.

Liberal Democratic Party (LDP) member Kenzo Fujisue shared an image of himself holding volumes three and four of the Tawawa on Monday manga, making his opinion known following the controversy stemming from the full-page ad.

The Tawawa on Monday series also prompted comments from Love Hina manga creator and political hopeful Ken Akamatsu on Sunday. Akamatsu likened the criticism from the global gender equality organization UN Women as “external pressure” to regulate Japan’s “freedom of expression, especially for manga, anime, and games” and that such pressure is not new. He elaborated that such regulations need to be approached with rationality and not be obeyed simply because an outside party is demanding it. Akamatsu’s definition of “external pressure” does not necessarily mean “outside Japan.” He used the removal of PSAs featuring Virtual YouTuber Tojou Linka as an example.

The manga inspired a 12-episode season of anime shorts that debuted on YouTube in October 2016, but YouTube removed the first episode before restoring it within the same week. Starting from the second episode, NBCUniversal Entertainment Japan relaunched the series on Nico Nico Video. The anime’s Blu-ray Disc included two unreleased episodes.

Tawawa on Monday 2 (Getsuyōbi no Tawawa 2), the anime’s second season began streaming on Abema TV in September 2021. Crunchyroll is streaming both seasons.