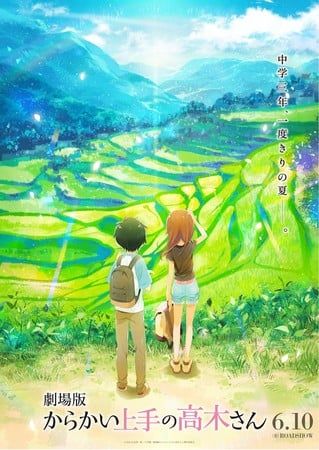 The official website for Gekijōban Karakai Jōzu no Takagi-san, the Teasing Master Takagi-san franchise‘s upcoming anime film, revealed on Saturday that the film will have four different ending theme songs, changing for each of the film’s four weeks of screening. Rie Takahashi, the voice of Takagi, will perform the first week’s ending theme song “Ashita e no Tobira” (The Door Into Tomorrow).

The site also revealed that Yuiko Ōhara, who has performed a number of the opening and ending theme songs for the franchise‘s previous television anime, will perform the film’s insert song “Hamabō no Hana,” in addition to performing the film’s theme song “Hajimari no Natsu” (The Beginning of Summer).

The film will open in Japan on June 10. In the film’s story, Takagi and Nishikata are in their final year of middle school, and have both anxiety and hope for the future. During the summer of their final year, on the day before summer vacation starts, the two find a kitten that they name Hana. They decide to take care of the kitten themselves until they can find its mother. Inori Minase plays Hana, and Haruka Tomatsu plays a pet shop employee named Ōta.

The main staff from the anime’s third season are returning for the film. Hiroaki Akagi is directing the film at Shinei Animation, while Hiroko Fukuda is credited for composition, as well as penning the script alongside fellow third season scriptwriters Aki Itami and Kanichi Katou. Aya Takano is once again designing the characters. Hiroaki Tsutsumi is returning from previous seasons to compose the music.

The film will have four different bonuses for moviegoers over its first four weeks. The first week’s bonus is a 68-page booklet with exclusive manga content by original manga creator Sōichirō Yamamoto.

Thanks to Centcom08 for the news tip.

Sentai Filmworks Licenses 'When Will Ayumu Make His Move?' Anime