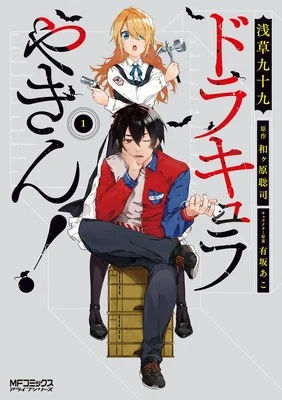 Wagahara’s light novels follow Yuri Toraki, a nocturnal vampire who earns a living by working the night shift at a convenience store in modern day Japan. While on his way home one day, he runs into a blonde woman who is entangled with a drunkard.

Wagahara (The Devil Is a Part-Timer!) launched the Dracula Yakin light novel series in September 2020. The fifth novel volume will ship on June 10.

Asakusa previously drew the Rascal Does Not Dream of Petite Devil Kohai (Seishun Buta Yarō wa Petit Devil Kouhai no Yume wo Minai) manga adaptation of Hajime Kamoshida‘s novel of the same name. Asakusa launched the manga in Kadokawa‘s Dengeki G’s Comic magazine in March 2018, and ended it in December of that same year. Kadokawa released two volumes for the manga, and Yen Press released both volumes in English. The original novel is the second in its series, after Seishun Buta Yarō wa Bunny Girl-senpai no Yume wo Minai (Rascal Does Not Dream of Bunny Girl Senpai).