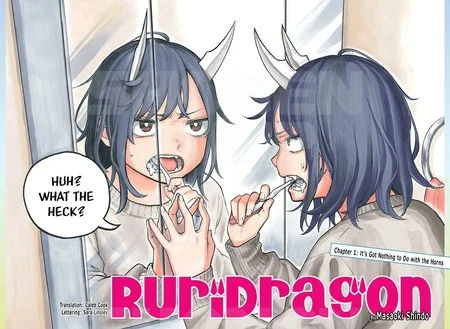 Viz Media and MANGA Plus both began publishing Masaoki Shindō‘s RuriDragon manga in English on June 12. Both services will publish the second chapter of the manga on Sunday.

The story of a young dragon girl being lazy, doing her best…and being lazy again. A new series begins!

Shindō launched the manga in the 28th issue of Shueisha‘s Weekly Shonen Jump magazine on June 13. The manga was featured on the cover of the 28th issue, and the first 54-page chapter had an opening color page. The manga is a serialized version of a one-shot that Shueisha published in the Shonen Jump GIGA magazine last year.

Shindō also previously published two one-shots in Weekly Shonen Jump: “Joreishi Rentarō no Yakusoku” in 2017 and “Count Over” in 2018.