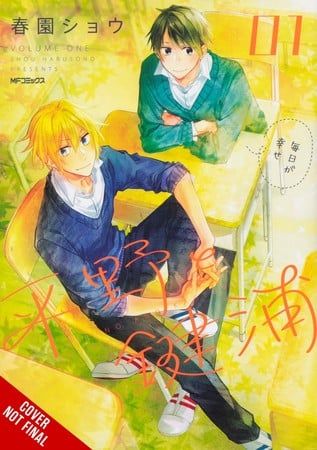 Yen Press announced on Friday that it has licensed Shō Harusono‘s Hirano and Kagiura manga, a spinoff of the author’s Sasaki and Miyano manga, and it will release the first volume in October.

Basketball players. Bad boys who aren’t really bad boys. Roommates. Senpai-kouhai BL romance. It all started when Kagiura moved into the school dorms with what seemed to be a bad-boy upperclassman. But after he’s left in the tender care of his mother hen of a roommate, Hirano, it’s too much to ask for Kagiura not to fall in love…right?!

Harusono launched the Sasaki and Miyano manga on the pixiv website in 2016. Yen Press licensed the manga, and it describes the story:

It all started like a typical old-school boys’ love plotline—bad-boy senior meets adorably awkward underclassman, one of them falls in love, and so on and so forth. But although Miyano is a self-proclaimed boys’ love expert, he hasn’t quite realized…he’s in one himself. Which means it’s up to Sasaki to make sure their story has a happily ever after…!

The television anime premiered on January 9 and aired for 12 episodes. Funimation streamed the anime as it aired and also streamed an English dub.