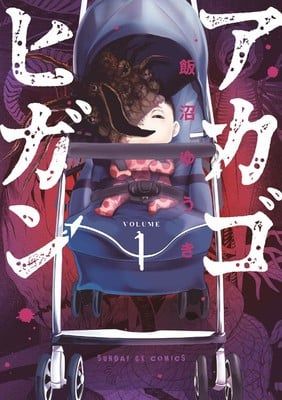 The July issue of Shogakukan‘s Monthly Sunday GX magazine revealed on Friday that Yuuki Iinuma‘s Akago Higan manga will end in the magazine’s next issue on July 19.

The manga centers on Umeko Tachiki, a doctor who is trusted by her patients and adores children. She has expressed her desire to have a child with her husband. One night, tragedy breaks out in the hospital when monsters begin appearing and killing everyone, and the source of all the monsters are the babies in the hospital.

Iinuma ended the Itsuwaribito manga in August 2013. Viz Media licensed the manga in North America, and the company published the 23rd and final volume in April 2018. Iinuma also ended the Libra of the New Era (Shinsei no Libra) manga in May 2018.

Iinuma launched the Manten no Hoshi to Aoi Sora (The Starry Heavens and the Blue Sky) manga in Monthly Sunday GX in August 2018, and ended it in September 2019. Shogakukan published the manga’s third compiled book volume in December 2019. The manga is based on Hiroyuki Nishimori‘s novel of the same name.

Iinuma previously collaborated with Nishimori on the Nanimo nai Kedo Sora wa Aoi (There’s Nothing, But the Sky is Blue) manga, which is also related to the Manten no Hoshi to Aoi Sora novel. The pair launched the manga in March 2014, and ended it after seven volumes.